On a bitterly cold day in January 1981, Furman gave Red Smith a ride back to the Atlanta Marriott after a Falcons game. Bisher remembered, "We pulled up in front of the hotel, and as Red was getting out of the car, he said, 'This is tough on an old man.' Then he slapped me on the knee and said, 'But God, I love it.'" Bisher replied, "That's sort of the way I feel.  You keep at it because you love what you're doing and you can't find a place to stop."

Furman Bisher loved his job as much as he excelled in it, yet subtle social pressure to retire began during the 1980s.  Some lighthearted critics jokingly snickered that he was a dinosaur in 1988 when he accepted the Red Smith Award, but his passion for his profession allowed him to defy the snippy whippersnappers for another two decades.

"Stay away from hospitals" 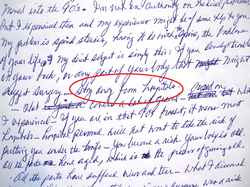 Notes laying on Furman's desk reveal his attitudes toward aging into the 90s, hospitals and surgery.  He scribbled down thoughts, the flow of free association, thoughts that sometimes conflicted with one another as he tried to find solid footing for the article's theme.  Apparently it was one of his last written musings.  How ironic that he died because he'd been taken off blood thinners in preparation for surgery that doctors ultimately nixed as too risky and unnecessary...  It seems that he agreed with them.  Click here to read his notes...