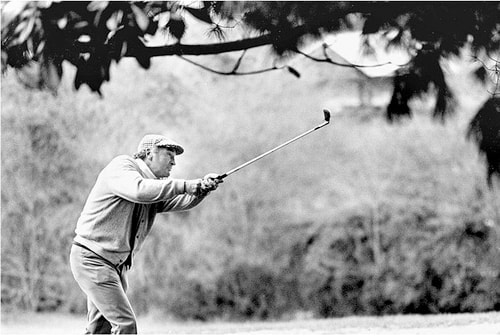 The "luck o' Furman" gets him out of trap after trap...
In the '90's, Furman found himself sitting on top of the world.  He married a trophy wife, distanced himself from family burdens that had weighed him down in the past, and was lauded with awards for career achievements. He became a sportswriting god... 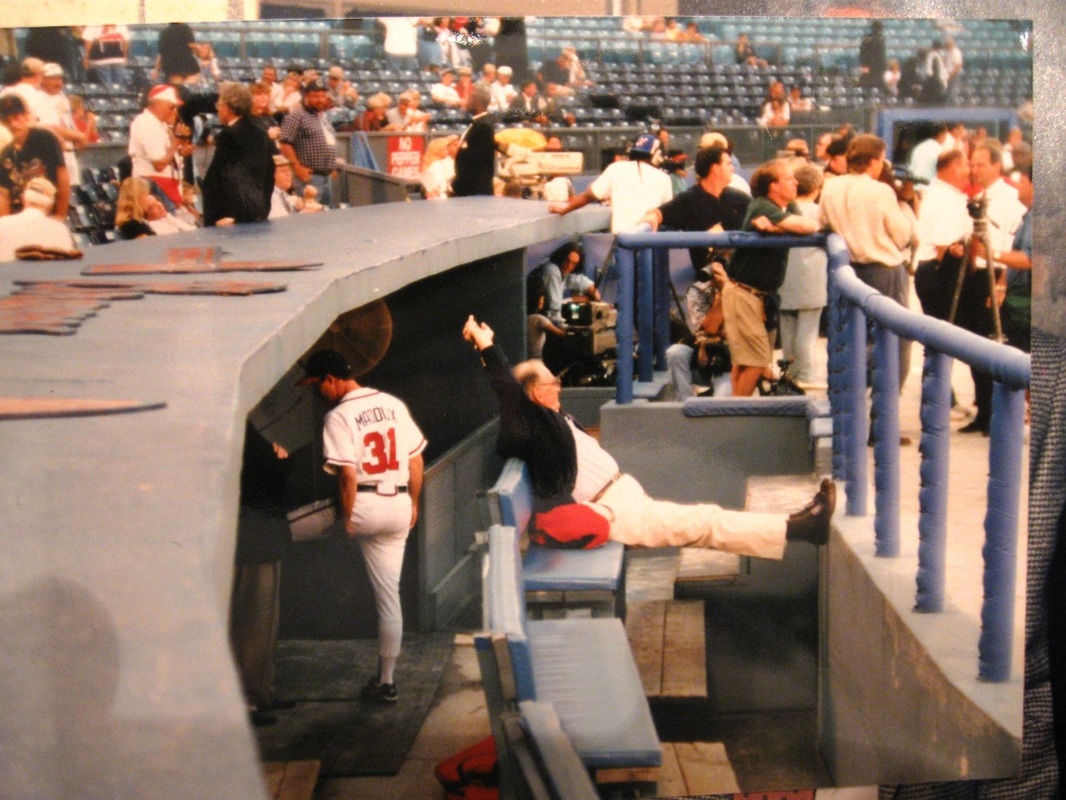 Bisher stretches in the Braves dugout before a game. 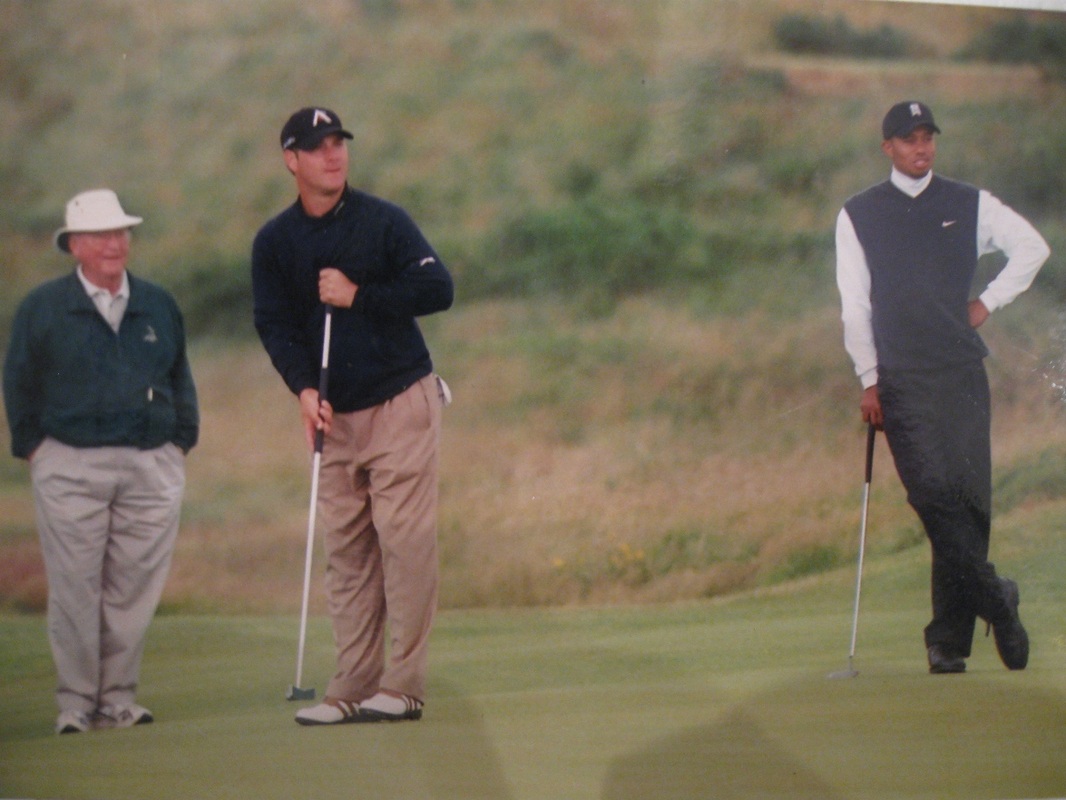 Furman Bisher (left) and Tiger Woods (right) waiting for a putt to drop. 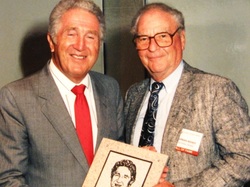 1993 With Murray Olderman
Bisher and his old pal, cartoonist Murray Olderman, at the latter's induction into the National Sportscasters and Sportswriters Association (NSSA) Hall of Fame. 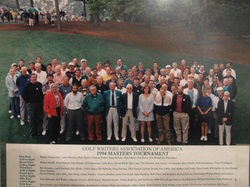 1994 At the Forefront of Golf Writing
Bisher stands at the forefront of a Golf Writers Association assemblage on a rainy day at Augusta. 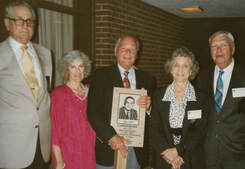 1995 North Carolina Sports Hall of Fame
In May 1995, the State of North Carolina honored Furman by inducting him into the Sports Hall of Fame. He thoroughly enjoyed the ceremony in Raleigh, and, fueled by a few martinis and congratulatory handshakes, went on a little too long in his acceptance speech about his "hick town" home of Denton.  In the photo, he posed (despite his scoffing of familial relations) with brother Harold and wife Elizabeth Bisher, and sister Helen and husband Clay Loftin. 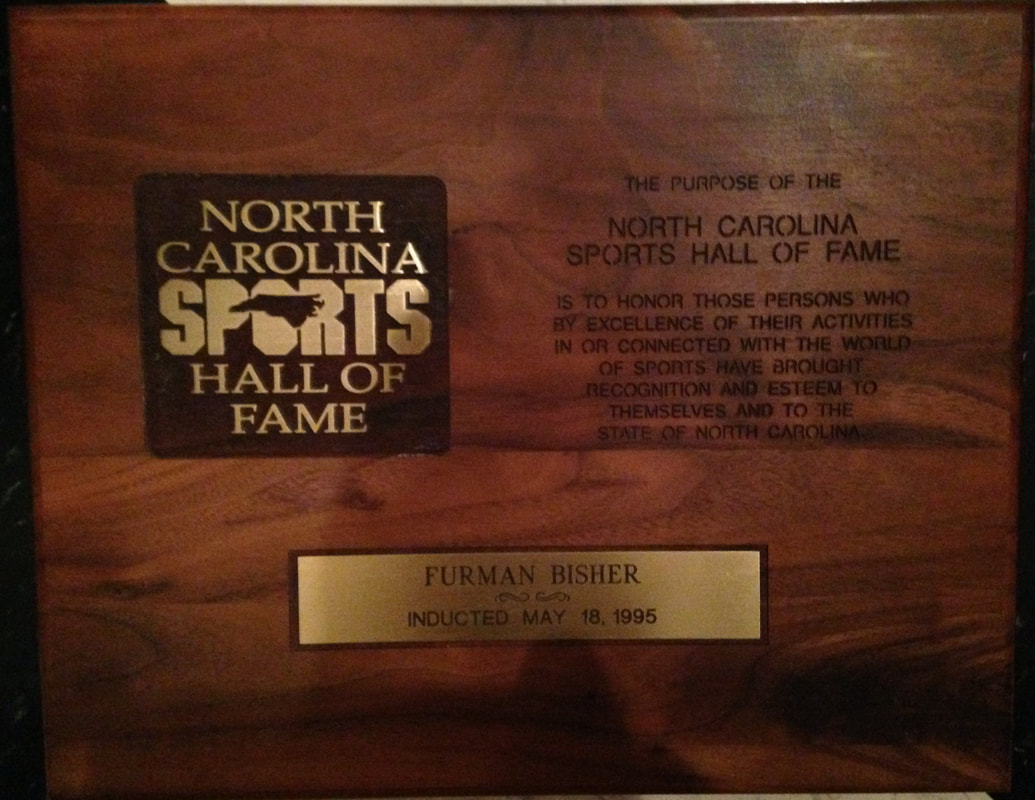 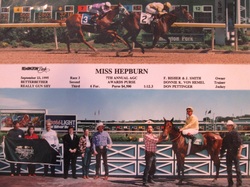 1995 Bisher's Horses
His farmboy roots instilled him with a passion for horseracing, though he was not much of a rider himself.  He bought into a few horses over the years--Miss Hepburn, Middleburg Life and others--for the sheer thrill of watching them compete, certainly not for the elusive earnings.  Tony Barnhart of CBS Sports wrote, "I could tell you about how much that man loved the utter civility of horse racing. On a brisk October Saturday in the 1980s Bisher took me to Keeneland race track in Lexington, Kentucky before a Georgia-Kentucky football game that night. He knew every trainer, every jockey and every owner. He taught me how to read a racing form and how to handicap horses. It was an experience I probably would have never had
without Bisher." 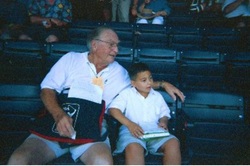 1996
Furman Bisher with grandson James Furman Bisher, III at a Braves vs. Dodgers game.  Furman was so busy that he never had time to take his grandson to another game (or to even visit his only "blood" grandchildren after 2004). 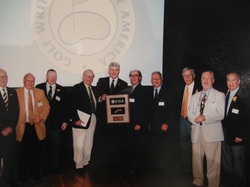 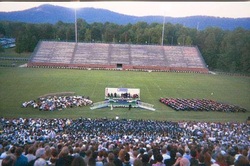 1999 Doctor Bisher
Bisher left Furman University after his sophomore year in 1936 after budget cuts eradicated the journalism program.  Even though he received his degree at UNC Chapel Hill in 1938, he always considered himself a Furman alumnus, and became a generous benefactor.  In 1999, his alma mater rewarded him with an honorary doctorate. 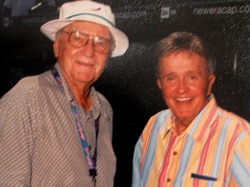 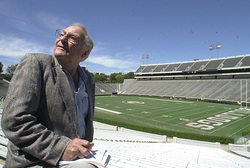 Bisher at UGA's Sanford Stadium in Athens
2007 Bisher's Last Georgia vs. Tech Game
Bisher attended every Georgia vs. Georgia Tech football game from 1950 until 2007.  Accusations of favoritism rang out from both camps, but he was close friends with both head coaches and athletic departments, was truly neutral in the rivalry, and tolerated one son who was a fanatical bulldog fan and another who went to Tech. 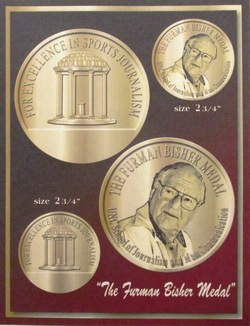 2008 UNC Furman Bisher Medal
In 2008, the University of North Carolina (UNC) School of Journalism and Mass Communication created the Furman Bisher Medal for students who demonstrate excellence in
sports journalism.  It is awarded annually with a $5,000 prize. 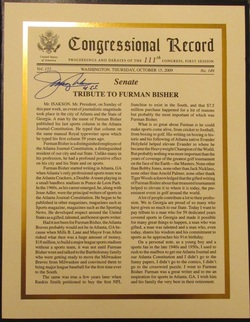 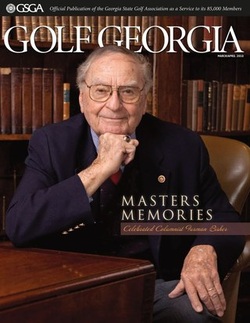 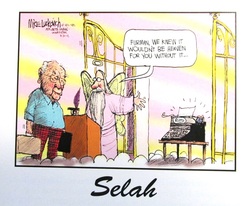 2012 Are there sports in the Afterlife?
Furman Bisher died on March 18, 2012 in Fayetteville, Georgia.  He had been watching ESPN in his living room when he felt enough discomfort to call 911. He felt ok by the time the paramedics arrived, and joked with them while they carried him away to the hospital nearby just for good measure.  He was about to undergo some cursory procedures before a likely discharge when he closed his eyes and slipped away as if on a leisurely afternoon nap.  Two days later, artist Mike Lukovich sketched this vision of Furman at the Pearly Gates...  We presume he's in his paradise, an eternal banquet of speeches lauding his greatness.