1974 Roses for Sportswriters
The Russian tradition of presenting roses to special guests was awkward for the all-male international delegation of sportswriters.  They didn't quite know what to do with their bouquets...  Bisher stands at far right.

1974 Gostinitsa Ukraina
The Ukraina was a nicer hotel than its image and stern rulebook implied. 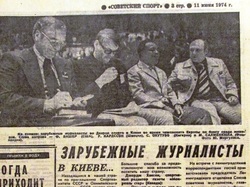 1974 European Boxing Championship, Kiev
The national sports newspaper, Sovietskii Sport, covered the foreign journalists while they covered the boxing tournament. From left to right, Furman Bisher, U. Carlsson from Sweden, S. Okutubo from Nigeria, and M. Salmenkiula from Finland. 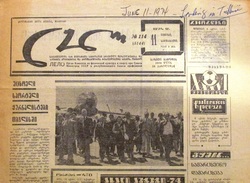 1974 The Other Georgia
The arrival of the international sportswriters group in Tblisi was front page news in the Soviet Georgian daily. Bisher is sixth from the right in the light colored sports jacket and trousers. 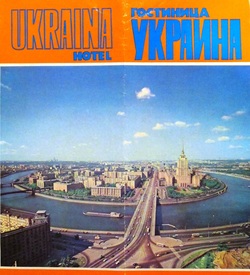 1979 Back in the USSR
The Hotel Ukraina and all of Moscow appeared a little brighter as anticipation grew for the upcoming 1980 Summer Olympic Games. 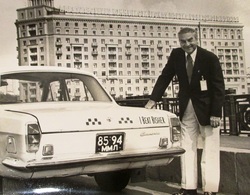 1979 Я победил Бишера
An obliging taxi allowed Bisher to place an "I beat Bisher" bumper sticker on his car. The sticker was typically only given to Atlanta Journal readers who bested Bisher on sports predictions.