As Lieutenant Bisher's November 1945 letter to Clark Griffith (below) shows, the sports and newspaper businesses were on his mind long before the ink dried on his honorable discharge. The Navy tried to talk him into staying on and even offered to transfer him from the reserve to a regular commission, but he was bursting with ideas for the postwar sports scene.  He signed his discharge papers on December 5, 1945 at Pensacola Naval Air Station, but was not released from service until the following month.  Confident as ever, he refused job placement assistance from the Navy and indicated his locality preference as "North (N.Y.)."  But Fate would carry him back to Charlotte... 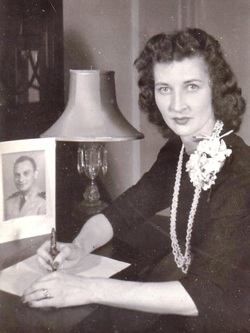 1944 Mrs. Frederica Bisher
Furman Bisher married Frederica "Freddy" Morris in the early 1940s.  She was an adoring bride whose upbeat correspondence helped sustain her husband during his training and long deployment in the Pacific.  On the back of this photo she penned, "Handsome gentleman on the lady's right is the lady's only and favorite pin-up boy...  Note the pikake necklace sent me by an admirer..." 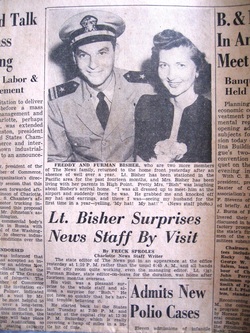 1944 Charlotte's celebrity couple
Lieutenant Bisher's surprise return from the Pacific was front page news in Charlotte.  "Lt. Bisher has been stationed in the Pacific area for the past 14 months, and Mrs. Bisher has been living with her parents in High Point...  I was all dressed up to meet him at the airport and suddenly there he was.  He grabbed me and knocked off my hat and earrings..." 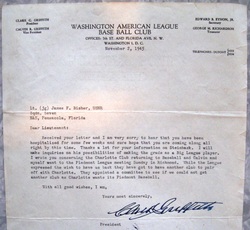 1945 Letter from Clark Griffith
November 1945 found Bisher at Pensacola Naval Air Station, anxious to resume his civilian life, as this letter from Washington Senators president Clark Griffith attests.  "...Thanks a lot for your information on [Lawrence?] Steinbeck. I will make inquiries on his possibilities of making the grade as a Big  League player. I wrote you concerning the Charlotte Club returning to Baseball and Calvin and myself went to the Piedmont League meeting Sunday in Richmond. While the League expressed the wish to have us back they have got to have another club to pair off with Charlotte. They appointed a committee to see if we could not get another club as Charlotte wants its Piedmont Baseball.  [signed] Clark Griffith"

1946 Journey in March
By spring 1946, Bisher was back in civvies, writing for the Charlotte News and on the road with Frederica, birddoggin' one sports story after another, as this short blurb attests.  Bisher's annotation on the margin suggests that it was written by an aspiring young ballplayer named Gale Wade. 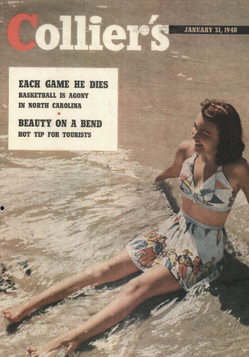 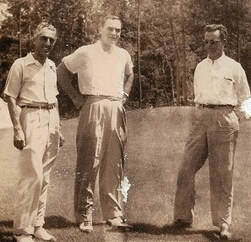 1948 Promoting Myrtle Beach Golf
Bisher was an avid promoter of golf from the earliest days of his career. In this 1948 photo, Bisher stands with the great golfer Byron Nelson (right) and Jimmy D'Angelo, "the father of Myrtle Beach golf." 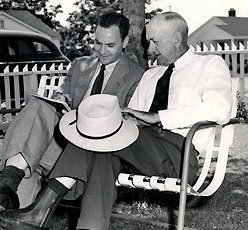 Click photo for link to 1949 article
1949 Joe Jackson Interview
In 1949, Furman drove to Greenville, South Carolina to interview "Shoeless Joe" Jackson, the famous Chicago White Sox outfielder who was a scapegoat of the 1919 World Series gambling scandal.  Jackson told him, "This will be the first time I tell this story and the last."   Bisher later told colleague Jeff Schulz, "We got $250 apiece for that story from Sport Magazine. That was good money. It was 1949.”  When Jackson died in 1951, Bisher eulogized that he was a "plain, simple man who died with a clear conscience."  Both men firmly believed that there had been no misconduct to pardon.  Jackson's baseball career had been cut short by an overzealous witchhunt. 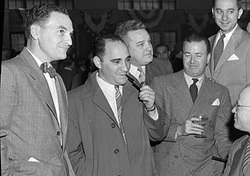