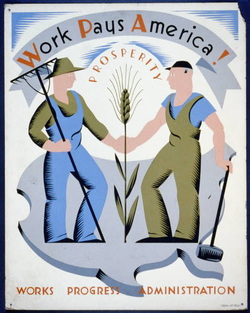 1938 From the WPA to the Lumberton Voice
Immediately after graduation from the University of North Carolina, Furman Bisher was hired by the Works Progress Administration (WPA) Federal Writers Project.  He spent the summer of 1938 rewriting and editing historical fiction harvested from writers all over the state.  He finally found "a real job" on the Lumberton Voice newspaper in August 1938. His first assignment was to gather information about a man with a large caliber bullet hole in his forehead, lying on a slab at the local morgue. The next eight months at the little weekly gave him a taste of every editorial job on the paper. He got to supervise layout and news coverage, as well as write editorials. 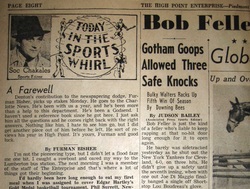 1940 High Point Enterprise
The High Point Enterprise picked up Bisher from the Lumberton Voice in March 1939, and provided fertile ground for his passion for writing and sports to blossom. He gained good experience as sports editor, covered the city beat, and learned to be an Associated Press telegrapher. After a year in High Point, his dynamic trajectory propelled him to the big city, the Charlotte News in May 1940. Upon his departure, his boss at the Enterprise, Soc Chakales, wrote, "He's been a Godsend. I haven't used a reference book since he got here.  I just ask him all the questions and he comes right back with the right answers.  Nothing like him." 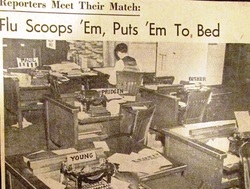 1940 Charlotte News office
This photo of an empty newsroom ran when a flu epidemic cleared it of all reporters.  Bisher's desk is annotated near the top right corner.  A green reporter named Jesse Helms worked for Bisher, starting a lengthy career that would end in the US Senate.

Colleague Burke Davis wrote, "James F. [Bisher] is the kind of fan
who knows who's where in every Class D league in the country, how many wins and losses, the records of every breathing major leaguer. Having been with The News only a few weeks, he's still unaccustomed to taking things easy." 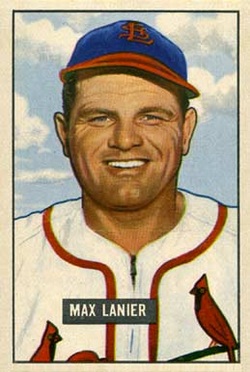 1951 Bowman Gum card
1942 Lanier & Bisher--the pride of Denton
Furman was 5 years old when he met Max Lanier at Denton Grammar School. Max was one
grade ahead of Furman, and their classes often faced off on in sandlot games at lunchtime.  Furman went down swinging like everyone else who faced Max, until Max dropped down a grade and they became teammates.

1942 was the last year before world war disrupted baseball and every other facet of American life. Denton swelled with pride when its own Max Lanier pitched and won game 4 of the World Series, helping the St. Louis Cardinals defeat the New York Yankees in 5 games.  ...and Furman Bisher lauded his old pal's victory on the sports page of the Charlotte News. When 40 of Denton's leading citizens feted Max, he shared the banquet table with a local hero just back from the Battles of the Coral Sea and Midway. Little did Furman know that he'd soon be visiting Midway.