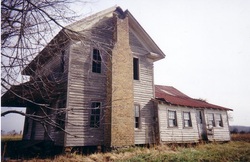 1917 - Furman Bisher was born in this farmhouse near Denton, North Carolina, the third of the four children of Mamie and Chisholm Bisher.  Furman survived two bouts of pneumonia before he turned six years old. 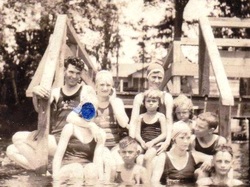 1928? - Furman (2nd row, 1st on right), family and friends at Lake Waccamaw near Whiteville, NC.  As much as he loved sports, he realized he would never be a star athlete, but decided at about 12 years old to become a star sports writer.  Playing baseball at recess against the talented Max Lanier, future St. Louis Cardinals pitcher, must have been discouraging, but syoung Furman towards . 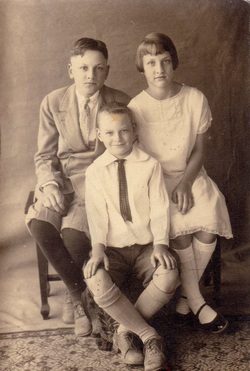 1928? - Furman (front and center) sits for a photo with brother Harold and sister Helen.
"Furman Bisher became interested in baseball in 1928," according to writer Ray Howe.  "His mother had told him to go out into the back yard to burn some newspapers--some back copies of the Atlanta Constitution... and his eye fell upon a baseball box score. It was love at first sight.  He knew nothing about baseball then, but to him a baseball box score was as intriguing as a freshly mad chocolate cake to other little boys.  'I wasn't interested in the story that went with the box score,' he innocently explained, 'but there was something about that box score. It was in small type, and it seemed to tell a story all its own.'  It was not until a year later that he made the acquaintance of The Sporting News, the Bible of Baseball... 'Our town team in Denton was having a practice and I was in the outfield shagging flies.  I wasn't big enough to be on the team, but I could chase balls.  One of them was lost out in the high grass of the pasture, and I and a fellow named Nappy Cashatt went out and started looking for it.  He was beating the grass with a newspaper, and I noticed that it had a whole flock of box scores in it.  I wanted to know what it was, and he explained that it was The Sporting News, that it came out every week, and that he subscribed to it.  Nothing would do but that I have it every week after he got through with it.  Nappy was manager of our town team, and he took a great interest in me.'  Coincidentally, Bish at that age was Denton's leading salesman for Collier's magazine, and for his efforts he received a baseball, a glove and bat as premiums.  That alone would have made him a big man in Denton's sandlot baseball."
Early 1930s
"His interest in baseball naturally led to record and rule books... and though he didn't play baseball, he paid full devotion to the game by umpiring," wrote Ray Howe.  "It was not unusual for the town team, when it became involved in a dispute with its opponents, to drive to the Bisher house to ask 14 year old Furman for his interpretation of the problem."

Furman Bisher and his classmates from Denton High School rode on the back of a truck to Washington, DC to celebrate their graduation. 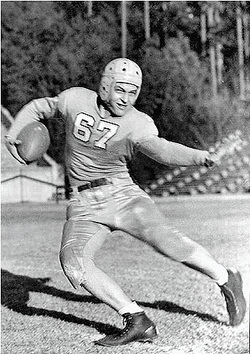 1934-1936 - Furman Bisher wrote Furman University soon after high school graduation and the president of the institution himself replied with a cordial letter. Young Furman left Denton for college in Greenville, South Carolina when he was just 16 years old.  He joined the Furman University football team, but excelled as team manager, not player.  When the university axed its new journalism school, Furman regretfully transferred to UNC Chapel Hill. 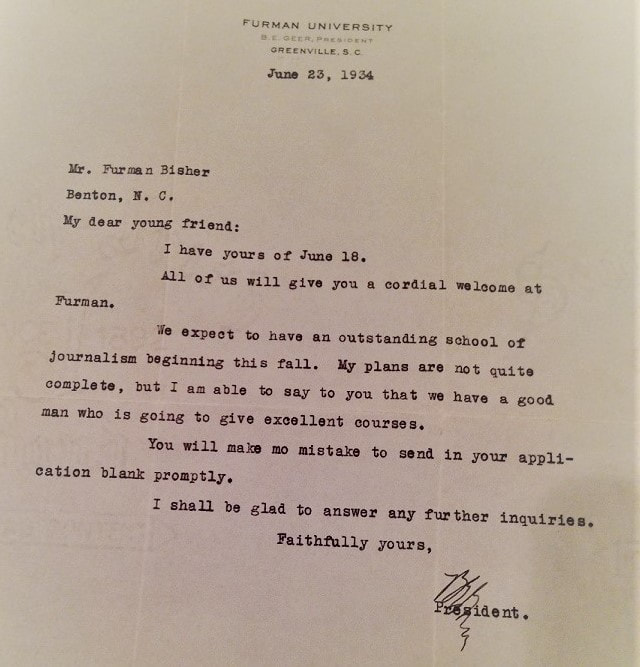 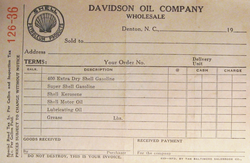 1935-1937 - On summer breaks, Furman Bisher returned to Denton and drove a truck for the Davidson Oil Company, hauling oil over Wildcat Mountain. 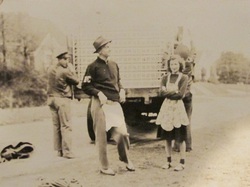 He also bartered part-time work for room and board at a funeral home, and
remembered a lifeless passenger popping upright in the back of the hearse one
night while driving on a lonely country road...

1936-1938 - Furman Bisher, college boy...  He joined Chi Psi fraternity and became a proud lifelong member.  Professors O.J. "Skipper" Coffin and Phillips Russell were mentors that he would credit decades later for their inspiration.  In 1938, he received a Bachelor of Arts degree in Journalism from the University of North Carolina.
Click the button below to see a gallery of 1920s & 1930s photos.
Photo Gallery